Disney's "Alice in Wonderland" Will Tour 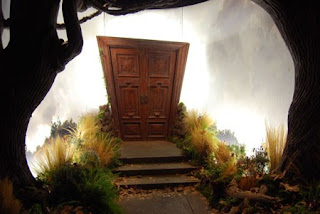 Apparently, we'll all be able to follow Alice down the rabbit hole. But where? How? So many questions remain. My friend Jen sent me this link today, and it sent me searching to no avail for more details.
It's something Disney constructed for Comic-Con. It looks absolutely amazing. But no details are given about where we can expect it to tour. I very much enjoy prop and costume tours. "Lord of the Rings" did it. Disney's new, "A Christmas Carol" is touring the country via train, charging no admission I might add. It's a new trend that's a winner if you ask me.
Experiences like this bring us one step closer to immersive experiences from films we love.
Just imagine what it would be like if we could spend a day actually living the events of a film. Think of a grand murder mystery party recreated in the mansion where they filmed, "Clue". (I'm sure it was a set, but just let me have that one.) Just imagine spending a day solving a mystery inside Disney's, "Haunted Mansion".
Universal is soon to debut the new Harry Potter section of their Florida theme park next year, so we're getting closer at any rate. There's always the Great Movie Ride at Disney's Hollywood Studios. But these are all experiences you have from a nice safe distance. I want the freedom to do something much more hands on and first-person. It's the next logical step for fans.

Well, a geek can dream, right? Until then, I guess we'll all just have to stick to frequently googling the Alice In Wonderland tour. Sigh...
Email ThisBlogThis!Share to TwitterShare to FacebookShare to Pinterest
Labels: Disney, Movies
Newer Post Older Post Home