If you were a kid in the 80's or 90's, you were frequently told that all your dreams could come true. Everybody was telling us we could do it. (The "it" was up to us.) Now we're all grown up and there seems to be a divided consensus on whether or not that was true.

If you were lucky enough to go to Disney World back then, you probably remember the Epcot ride "Journey Into Imagination".

The chorus to the song "One Little Spark" that plays throughout the ride goes:

Imagination,
Imagination,
A dream can be a dream come true,
with just that spark in me and you

My husband and I went to Epcot again last night. It's become our go-to place to walk and talk. I know how lucky that makes me. Living in Central Florida is like being on a permanent vacation.

The happy kind, not the coded mobster-talk kind.

It seems like a weird thing to do with the world in such a state. We felt guilty about it. But we're both busy with work and we both keep to-do lists making sure we stay engaged as citizens every single day. That creeping existential terror we feel right now? Turns out, the bubble of Disney World is a pretty effective antidote to that.

We did one lap around the world showcase. On our way out, we walked past the Journey Into Imagination ride. (I've obsessed over it previously for Orlando Attractions.) It was open. We always go at night when the ride is usually closed. This time? We walked right on the ride. No wait.

It gave me the same sentimental swells. Nostalgia mixed with belief and joy. But this time, I was on the ride as a thirty-four-year-old. A lot of my friends now are cynics, though they'd call themselves realists. So...was it all a lie? Is a dream still a wish your heart makes? Can you make your dreams come true? 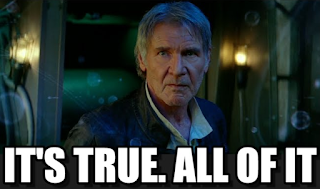 Today, I just want to remind you, it's true. All of it.

I know it's a weird time to be an artist. The temptation to quit projects in progress to do something that "really" matters is strong.

Just add civic responsibilities to your daily to-do list. Because art can change lives and minds and hearts. And bank accounts, which can help you transform other people's lives.

But I didn't just come here to preach. I brought evidence.

I loved that ride as a kid. I wrote about it for a magazine. When we moved to Orlando, I met the man who played the Dreamfinder for an interview when I was working on a local tv show. Then we became friends. In many ways, Ron Schneider has become a mentor to me. He's kind and generous. In December, he even brought me to a play he directed and I got to sit in the back of house with him and watch.

A few days later, Jake and I pulled together a shoot for a comedy sketch my partner and I wrote months earlier. 2016 was shaping up to be the first year I didn't film anything since 2013 and I felt really weird about that. So we just chose a sketch from the pile and started producing.

It was kind of last minute. (Which is making the editing a mighty struggle...that was officially my last shoot without an actual crew.) But you know who agreed to be in it? Ron Schneider. THEE Dreamfinder. My friend. A performer of the highest stature. It genuinely still blows my mind.

I still have a long way to go in figuring out how to get the things I see in my head to show up onscreen the way I want them. There's still a considerable gap between vision and product. But I'm learning and I need to keep going. And so do you.

Your dreams can become literal reality if you just keep going and this picture is the proof.

Squeezed almost everyone into this shot last Tuesday. This was a comedy sketch and I'm so grateful for the people who came out to work with us. (And all the Stevens/Stephens who made it possible!) In 2017, we do our next proper short film. You guys...its an action comedy. To say I'm excited would be a bit of an understatement. (Plus we're working on a potential collaboration with someone I really admire. Eep! Nervous! Excited!)
A photo posted by Audrey Brown-Williams (@audreyscleverusername) on Jan 1, 2017 at 9:16am PST

Me on the left, Ron Schneider on the right and all our extras and actors in between.
Email ThisBlogThis!Share to TwitterShare to FacebookShare to Pinterest
Labels: Artists, Disney, Disney World, Dreamfinder, Epcot, Figment, Florida Dream Life, on calming down, On Writing
Newer Post Older Post Home