Under The Shadow - On Netflix Now 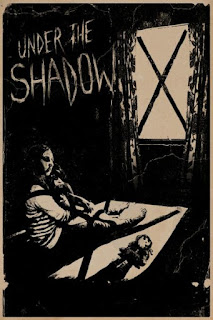 I watched Under The Shadow almost two weeks ago, a haunting film about the specter of war and fascism. I've thought about it every day since. Aside from the fact that it's thoughtfully crafted and well-performed, it's also eerily relevant.

I fully admit I'm a strange mix of snob and cult fan when it comes to horror. Some of my favorites in recent years have been The Babadook and It Follows. I'm looking forward to The Autopsy of Jane Doe, which I believe was done by the same director responsible for the captivating and beautiful Trollhunter.

The fact that I can even watch horror movies sometimes surprises me. My reactions to them can be...uneven.

I can't stomach slasher films or haunted houses because I can't handle scenes that echo actual violence happening in the world. Give me monsters all day long. But the church scene in Kingsman? Total freakout. Not a fun catharsis for me.

The over-the-top ending that saw villains' heads exploding in tiny little rainbow clouds? Didn't bother me in the least. Thought it was a sheer delight.

The ultraviolence of a Tarantino movie seems to exist in an alternate universe. A world where Samurai swords can be taken on planes like carry-ons. It doesn't stay with me because it's not realistic. I don't believe it's happening and I don't have to worry about 88 samurai being killed by a woman out for revenge.

Horror is specifically designed to evoke and antagonize. And an antagonized brain won't always behave in a predictable way. As Wes Craven said, "Horror films don't create fear. They release it." And maybe it's just me, but it feels like it's been a long time since we've had such a variety of specific, possible fears from which to choose.

On that unsettling note, Under The Shadow presents a familiar terror. Something strangely realistic, which may seem like an odd anecdote about a horror film involving...well, I won't spoil it in case you haven't seen it. But the movie spends as much time on the resentment oppression brings as it does on supernatural forces. Like Poltergeist, Under The Shadow wants to remind you that your home might not offer inherent solace.

Not when "they" are coming for you.

Watch the trailer below, then head to Netflix for an incredible film.