A Patch of Fog: Movie Review 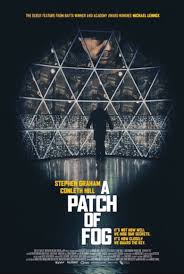 A Patch of Fog is a series of echoes, an engaging literary meditation on what is sent out and returned. It's a film that manages to be both genre and literary, though the latter becomes dominant.

I love genre, but there's something restful about character-driven films grounded in reality. British films seem to do this particularly well, partially because they're willing to attempt it more often than the American film industry right now.

Watching a realistic story about human behavior unfold feels relaxing in a world currently dominated by sequels and blockbusters. I'm not complaining about that! It's just a nice break.

The main character is Sandy Duffy, an author famous for a novel based on a true story from his childhood. Sandy, played with verisimilitude by Conleth Hill, has parlayed the success of his novel into a career teaching writing to undergraduates and a steady side gig as a TV commentator.

As a boy, he once wandered away from home during an intense fog. This forced his agoraphobic father to make a choice between facing his fear to search for him or trusting that the boy would find his way home on his own. Learning what choice his father made certainly informs the rest of the narrative.

One day, Sandy gets caught shoplifting a small item from a store and the security guard, Robert, threatens to have him arrested on the street. That is, unless, Sandy will go out for a beer with him.

Stephen Graham plays Robert and provides a new and unsettlingly authentic take on the boundary breaking acquaintance. He brings an uncomfortable vulnerability to the role that pairs well with Hill’s unpredictable and occasionally hysterical reactions and overreactions. We’ve all met someone like Robert at some point and we’ve all wondered how far they'll go and why they’ve chosen us. There’s something eerie and familiar about the plot.

From this point forward, the film’s tension escalates... 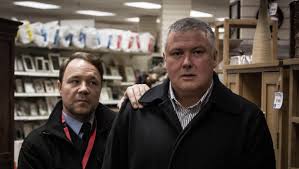 The exact nature of the danger is consistently obfuscated, which means that titular fog never quite leaves our mind. Robert is clearly enjoying his new association to a minor celebrity and presents a series of ever-increasing requests as thinly disguised blackmail.

Sandy feels held hostage by Robert and seems unsure how to proceed. He’s insecure and unusually fixated about what a minor shoplifting arrest might do to his reputation. Yes, there is a reason and yes, we learn what it is.

One of the great joys of this movie, for me, was that it never stayed too long in one place. There are only so many ways a scenario like this can end. Just when you think you know which way it will go, the film takes a left turn. (And then a right…and then another left.) It’s also not afraid to present you with multiple themes, all of which artfully float in and out of the film and serve the narrative to great effect. White lies, predators and prey, loneliness, voyeurism, self-sabotage…these are just a few.

What could’ve easily become a claustrophobic, predictable thriller in less capable hands is expanded yet again by a solid script, smart directorial choices and the presence of excellent supporting actors playing characters who ask the questions we need them to ask. Lara Pulver shows up for a particularly well-rounded performance as Lucy, host of the TV show Sandy appears on as a commentator.

Pulver is known for her sense of power. (You’ll very likely remember her incomparable turn as a very modern Irene Adler on the BBC’s “Sherlock”.) Her incredibly nuanced ability to dial that strength up and down helps the audience take Sandy’s psychological temperature, so to speak, at key points in the film.

Best of all, she’s not just there to react to him. Lucy goes on a journey all her own throughout the film. Again, the word that comes to mind is expansive. In a largely male-dominated film, getting to watch Lucy’s very specific fears and theories dance across her face make this story feel real. My only complaint is that there could’ve been a bit more of Lucy and her daughter. But my feeling is that her vagueness of motivation is intentional. This is a movie where any character, at any given moment, might make a sharp turn for reasons of self-preservation and Lucy carries that thread.

If you've been wondering where the character-driven films are nowadays, look no further.
Email ThisBlogThis!Share to TwitterShare to FacebookShare to Pinterest
Labels: movie reviews, Movies
Newer Post Older Post Home