My friend Eric messaged me to let me know this exists over at Firebox.com. It's the perfect gift for the fellow film geek in your life. 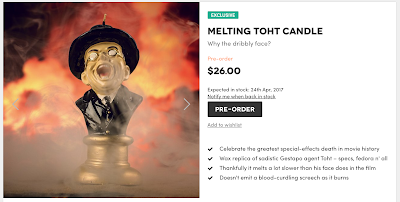 In fact, as a minimalist, that's one of the many things I love about the Indiana Jones stories. The value of wealth and objects is always situated below the value of people. (Look back, it's a theme in every single movie.) Anyone who tries to flip that worth system in the Indy universe usually (nay...always) ends up dead.

That's what makes this candle a kind of Matroyshka doll of thematic significance. Honestly, if I wanted to...I could go even further than I have with the significance of a Nazi character being reduced to ash by the fury of a righteous God. But that's dessert talk.

If you're like me and you love to spend time at the intersection of real history and fictional film, this article offers a nice starting point. But there's so much more. If you've always wondered why Indy and Marion can't look at the light released from the Ark of the Covenant, there are fascinating reasons as situated from a historical text perspective that the film actually got very correct. They even got the ceremonial Ephod almost right that Belloq wears in his final scene.

Embarrassing Bonus Round: For career day in first grade, I dressed up as Indiana Jones. I've maintained that interest in historical archaeology my entire life. I was the nerd who signed up for a Dead Sea Scrolls class during college orientation. There were five students in the class. Proud nerds, one and all.

I've yet to see a really good show or doc that delves into that aforementioned cross section instead of skimming the surface in a more tourist-minded fashion. If you know of any, include them in the comments!
Email ThisBlogThis!Share to TwitterShare to FacebookShare to Pinterest
Labels: Indiana Jones, Movies
Newer Post Older Post Home