So, I Do This Now: A Reel Pitch Fest - Episode 7 (+ An Interview with The Mexican Vampire Woman) 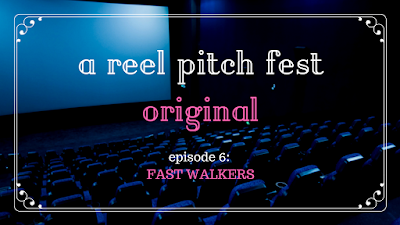 The thing about being a writer and director is that you must be able to speak up for your ideas. Did you know they make you say them out loud? Did you know you also have to be good at saying them out loud to actors, producers, and anyone with money?

This is a challenge if you hate your own face. Or voice. It's ironic that the gripping self-consciousness that makes some of us creative is also what prevents us from creating a finished product. Unless curling up in a ball or being socially awkward is a product, in which case, I am a captain of industry.

So anyway, I started a YouTube *show* though I don't feel like you can call it a proper show if there's no biz afterward. I mean, it's just me recording videos with QuickTime on my laptop. No lights, no audience, no key grips. Just...my face. That I hate.

But the other thing about being a writer and director is that it's fine if - oh, say - you have really big teeth and a tiny upper lip, because you don't have to win any pageants to do your job.

It's called A Reel Pitch Fest. I share ideas I have for movies. Sometimes they're original, most times they're prequel, sequel, or remake ideas. Because why the heck not?

My goal is to get better at pitching and communicating. It's definitely not my goal to have one of my ideas go viral and get discovered and be given merry loads of cash to immediately put several of my movies and short films into production. That would just be grandiose.

I've been test driving it for a while and there are 7.1 official episodes on my YouTube channel. Here's the latest. I'm not usually in a car...so...sorry about that.

I'll share each new episode here on my blog as they release every Friday. If you want to play catch up, here are links to the other episodes.

Also on my YouTube channel? An interview I did with the Mexican Vampire Woman back in 2011 during my correspondent days that randomly got 8,000 hits one night after I transferred it from Vimeo because they changed some of their rules.*

Oh, internet, you wily minx. You're so unpredictable.