They Might Be Giants are Worried About the Fall of Civilization: This Review of Their New Album, I Like Fun, is Too Long

This is a review of They Might Be Giants newest album I Like Fun. I think the best way for writers to honor musicians is to write about how the music makes them feel. And TMBG makes me feel like I should just say all of my too many words.

Even when sentences like the one I just wrote contain awkward syntax.

OR How I learned to stop worrying and just write the stream-of-consciousness blog about TMBG I've always wanted to write.

Therefore, this will also be:

1. a story about how I ended up at my first TMBG concert last Thursday night.

2. a brief history of (the) time (I first heard and learned to love the band)

3. a close look at some of the lyrics from the album and an opinion on what the album as a whole expresses

Sidenote: This entire review of They Might Be Giants' new album I Like Fun will orbit around one central question. Are we fans of bands and musicians because they resonate with our central personhood or are our personalities and thought patterns slowly shaped to match our tastes in music?

That's right, this review is a metaphorical astrolabe. And I am pretentious. And water is wet.

I've reached my own conclusion, but what do you think? Do you like "your" music because it makes you feel known? Or do you learn to see the world as described by your favorite bands? Is it a combination of both?

Anyway, about that review... 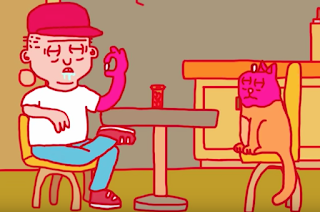 The band still transcends genre. They still write whatever they please and they're just as prolific as ever. Thank God. In this age of anxiety, we need consistency, particularly of the brilliant variety.

I listen to They Might Be Giants often. The internet knows this. Just a couple weeks ago, in a fit of raging insomnia, I tweeted a link to their song "Man, It's So Loud In Here" to illustrate what happens to my over-thinking brain when it knows it's supposed to shut down for the night.

So anyway, Big Brother knows I like They Might Be Giants. Several days ago, I was listening to them on Spotify when I was notified via in-app advertisement that they:

I listened to the album immediately and bought a ticket forthwith. There was much rejoicing. The concert was everything I hoped for. They played the hits. They also played the precise songs from the new album that resonated with me most.

The banter was witty, including a running joke about Microsoft's anthropomorphized office assistant Clippy. The performances were masterful. I especially loved the "quiet storm" portion of the show, in which they played stripped down versions of some of their most iconic songs.

The music of TMBG is often so light-hearted, it's easy to overlook its complexity. Until you watch the band play live. The unique, ever-changing time signatures and panoply of instruments is a reminder that music is work. And the more ambitious the songwriter, the more nuanced and complicated the live performance.

What I guess I'm trying to say is, TMBG worked really hard to entertain us and I'm so grateful.

SO ANYWAY, ABOUT ME

I don't know how to describe the floaty, dreamy feeling of suddenly being almost front row, center for a band I've loved for years. The experience is even more surreal when you've landed there almost by accident. I don't stay in the loop or the know or "leave my house" very often. To go from listening to them regularly in my home office to looking at their actual faces was a delightful surprise.

For a long time, I've been fighting the impulse to do a creative writing exercise based on their entire catalogue. One bit of writing inspired by each song, in chronological order. I want to write about a mother's terror for Dirt Bike. I want to write about how overlooked statues in museums must feel for O Do Not Forsake Me.

You know, thereby obliterating the clever nature of their songs in favor of some good-old-fashioned indicating. I don't know. It sounds like fun.

Being at that concert felt like going to church or having an out of body experience. That may not initially sound like a compliment, but I suffer from a lot of chronic pain. So out of my body is a nice place to be sometimes.

And hey, dissociative states offer the perfect segue to discussing the songs on I Like Fun. Because the second track is titled "I Left My Body". But let's start from the beginning...

THE SONGS (and creeping existential dread) OF I LIKE FUN

After my first listen of I Like Fun, I kept thinking of their 2011 release Album Raises New and Troubling Questions. TMBG fans know to expect irony and sarcasm, often within titles. For example, that album did not raise new and troubling questions. It raised endorphins. It was a light-hearted romp including polka versions of hits. They even covered Chumbawumba's 1997 brain bruiser "Tubthumping".

So an album titled I Like Fun, while still remarkably pleasant, is much heavier.

2017 was a weird year. [insert cliche joke about understatement of the year here] It was collectively weird for society as a whole for shared reasons I don't feel like listing. You get it. You were there.

Many songs on I Like Fun feel like they are seeking comfort and understanding of world events via distance, time, historical context, or a change in point-of-view. Individually, each song is as micro-focused topically as their songs have always been. (Some past examples of this are James K. Polk and Meet James Ensor.) If you step back and look at the album as a whole, meaning is evident.

"The Bright Side" has lyrics like" pushing through the sediment" that bring to mind an archaeological dig.

"Push Back the Hands" is about regret.

"By the Time You Get This" is a song that initially sounds like a letter written by survivors from The Walking Dead. It's quickly revealed to be a letter written by people from the past and addressed to humanity in 1937. The optimistic assumptions of the letter-writer make for a funny and painful song. They imagine that poison, hatred, dissent, and contradiction will all be maladies of the past.

The post-apocalyptic imagery of my personal favorite "When the Lights Come On" makes you wonder if one of the Johns was stuck in one of the hurricanes of 2017. (Or maybe that's just what I think because listening to it reminds me of when I was stuck in the hurricane. See? Astrolabe.)

The song could also function as close-reading of nuclear fears. But then again, like every other TMBG song, it might just be a satire of my own outsized fears. A snapshot from a moment in time we'll fondly recall ten years from now. Sort of how our parents talk of walking away unscathed from the Cuban missile crisis, the writer writes to herself hopefully.

Plus, there's this lyric: "The toothpaste won't go back in the bottle now that it's granted our wish and we will never be rid of McAfferty's Bib." I just really love it.

As usual, this They Might Be Giants album is really a Rorschach. (Okay, Audrey, is it an astrolabe or a Rorschach? You know what you are? You are a windbag.) You hear what you hear as you listen. So it probably says more about my anxiety that I've identified patterns of terror and time. However subjective the meaning, the delivery of the message is pleasant and specific. I Like Fun is a soothing audible balm for an uncertain era.

I feel like we should Pink Floyd this album. Let's mute our televisions and synch it up with Dr. Strangelove and see what happens. 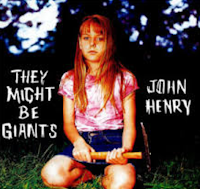 Am I a They Might Be Giants fan because I first heard their music in college, when my brain was trained to soak up and analyze ideas? My friend Joe Moody gave me Flood, John Henry, Apollo 18 and Mink Car to acquaint me with their sound. He liked The Talking Heads and Queen, so I considered his taste in music trustworthy.

We used to drive around campus in my 88 Sundance listening to their albums. My speakers were broken, permanently turned up to metaphorical eleven. So everything we listened to rattled the windows and buzzed out of the low-quality speakers in a way that likely did permanent damage to our hearing. But it felt like freedom.

Thanks to sense memory, those four TMBG albums are a pleasant Indiana spring. They are my fluorescent pink hair phase and the film classes I took in the summer semester. They are the first time I ever saw Run Lola Run and the smell of a short-lived line of Herbal Essences candles. They are the experience of living off vending machine snacks and wearing clothes from Goodwill.

I love They Might Be Giants because listening to them makes me feel entertained, heard and understood. Maybe reverse engineering why they make me feel that way isn't important.

I Like Fun is an intelligent, pleasant-sounding coping mechanism. Unless you're not scared like the rest of us, in which case, it is an ironic commentary on America's current neuroses. It stands up to the finest of their previous albums.

Buy I Like Fun by They Might Be Giants and also go see them on tour. They're well worth it.

Here's a bit of footage from the concert I attended.

Best. Show. EVER! They played Ana Ng, Older, Self Called Nowhere, James K. Polk, Bangs, Fingertips, Man It’s So Loud In Here...it was a piece of heaven. I felt safe and happy and free. I made friends, even though I sad-Hulked it alone to the concert. I really needed that. Thank you #TMBG! #theymightbegiants #lifelist #thebeacham #bucketlist #gigantic #ataleoftwojohns #putalittlebirdhouseinyoursoul
A post shared by Audrey Brown-Williams (@audreyscleverusername) on Jan 25, 2018 at 7:08pm PST