Why I Love Sigourney Weaver

One of my classes in grad school this semester is all about obsession. As a geek and unabashed fangirl, obsession is kind of...my life. Disney, theme parks, Star Trek, Movies, Action Heroines...I am familiar with the practice of digging for all the background information that could be found on any topic that I love. Geeks, it's our way, we're natural researchers.

So in celebration of one of my largest obsessions, action heroines, I'm re-releasing some previous material from my old ForcesofGeek.com column here on my blog. This is a chunk of my ode to Sigourney Weaver that I wrote over a year ago, and I still hope to use it as a chapter in a book of essays on action heroines someday soon. (When there is a rip in the space time continuum that allows me to go back in time and do two things at once.)


Alien was only Sigourney Weaver’s third film role. Her third film role, and it was her first starring role. Not only did she manage to kick off her career by starring in one of the biggest and most influential sci-fi films of all time, but she also managed to turn around and brilliantly spoof the roles that women are often relegated to in the 1999 comedy gem, Galaxy Quest. (Which initially looks like the ultimate Trek spoof, but turns out to be the greatest non-Trek cinematic love letter ever written to Roddenberry's franchise.) 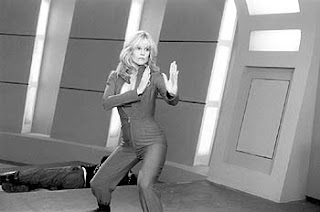 Weaver has played both strength and weakness convincingly throughout her career. Maybe it’s thanks to the fact that her breakout performance was that of one of our most definitive action heroines that gave her license to do whatever else she wanted to with her career and not be typecast. Once you’ve played such a convincing hero, does anyone ever have the right to accuse you of playing a female stereotype? Sure, they have the right. But then, you could just punch them in the face because you’re so buff from training for your roles.

Sigourney Weaver is immensely beautiful, but she’s not traditional movie star beautiful by today’s standards. She is realistically beautiful. Like someone you might run into on the street and think to yourself, “Wow, they’re striking.” This as opposed to what you might think running into Ms. America. (Which, depending on how spiteful you are, might range from rolling your eyes all the way up to making some kind of Barbie Doll quip. Not that I’ve thought this through or anything…)

Weaver’s beauty is unprocessed, which makes her strength just that much more believable on film. Let’s keep working with the Ms. America analogy, shall we? Can you imagine Ms. America with a grenade in her hand screaming at an Alien queen? Would you believe that? I wouldn’t.

Not that pageantry doesn’t have a place in the world. I myself once competed in Junior Miss, I won the Judges award, which is based on talking, my main talent in life. It’s just that one doesn’t typically associate pageant style with action heroine strength. The very idea is the wacky contradiction that brought you, “Miss Congeniality”. (Please, feel my sarcasm...)


But you take someone like Sigourney Weaver and put her in that situation, and the tension is palpable. Because you BELIEVE it. She is able to transform herself physically for her roles since she’s not starting from a silicone-injected/hair extension-ed canvas. She is a realistic woman and has more dynamic range as an actress because of that fact.
Then there’s the underwear thing. Weaver is frequently in her underwear as her character, “Ripley”. But again, because she doesn’t look like some kind of a bouncing, be-wigged caricature of womanhood, it’s not offensive or gratuitous in the least. At least, not to me.
To me, that just makes the character of Ripley much more vulnerable, so much more human. Pair that with the fact that the entire cast of the sequel, Aliens, also appears in their underwear and it just becomes the great equalizer. “See? We’re all wearing underwear. We could all be eaten by aliens because we’re puny humans…look how puny we are, standing here in our underwear.” It’s a wincing vulnerability. What’s worse than being eaten by an alien monster? Being eaten by a alien monster while only wearing your underwear. 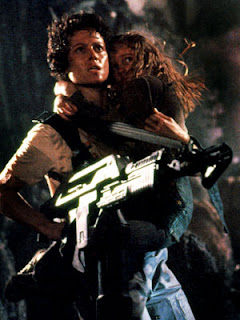 The character of Ripley is tough, but she’s not untouchable. She panics and she screams, which gives her a more real-world quality. Yes, I’m aware I just pronounced an alien-fighter as feeling “real world”. But these are not always traits that make it into the more modern action films.


There’s a whole trend out there of calm and collected action heroines who barely flinch when fired upon. (A la Angelina Jolie in everything.) This is okay (I heart Tomb Raider), and it’s partly due to the boom of superhero films we’ve experienced over the last decade. It’s just a different style.
But I think it’s Weaver’s terrified performance in Alien that keeps it from feeling like grade B schlock. If she were immediately tough when confronted with a big slimy alien with many mouths, we’d think, “Yeah right.” And roll our eyes.
But watching her fight for her life makes you so uncomfortable, that you can’t help but picture yourself in that situation. That’s exactly how a horror movie should make you feel.
Sidebar: Think of all the horror films that didn’t feel scary even though they had impressive effects. Why weren’t you scared? Likely because you didn’t believe in what was happening onscreen. It’s the difference between the original “House on Haunted Hill” and the remake. Sidebar over.
Here’s something else to chew on. Is the character of Ripley a horror vixen, an action heroine, or a sci-fi star? She allows us to be afraid and vulnerable via her experiences, and again, she’s in her underwear a lot. So that qualifies her for horror vixenhood.

She wields giant guns, has some pretty wicked arm muscles, sweats, and doesn’t “take no crap from nobody” which obviously makes her an action heroine.
Lastly, she outsmarts aliens and pilots spaceships. There you have it, she’s also a sci-fi star.
There are so many reasons to love Sigourney Weaver, especially in the realm of geekdom.
There's her voice work from Futurama, again, her comedic genius in Galaxy Quest, and her classic role from Ghostbusters. (In which, I'd like to note, she was smarter than any of the men appearing in the film, barring Spangler, of course.)
Weaver is one of my ultimate geek role models for a plethora of reasons, too many to mention here on ye olde blog. How about you, what do you love about her as an actress?